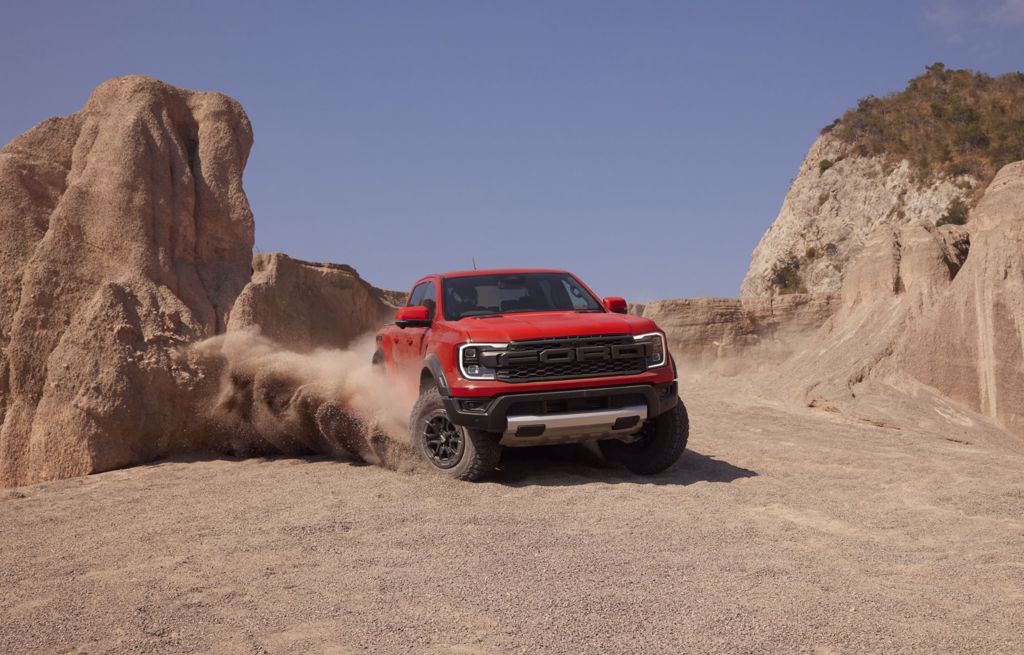 The next-generation and next-level Ford Ranger Raptor has arrived. Built to dominate in the desert, master the mountains and rule everywhere in between, the second-generation Ranger Raptor raises the off-road performance bar as a pick-up built for true enthusiasts.

Developed by Ford Performance, the Next-Gen Ranger Raptor is the ultimate performance derivative of the all-new Ford Ranger. With smarter technology controlling tougher, next‑generation hardware, Ranger Raptor blends raw power with mechanical and technical precision to create the most advanced Ranger ever.

European Ranger enthusiasts have special reason to celebrate as the all-new Ranger Raptor is the first model from the Next-Gen Ranger line-up to be launched in Europe, with customer deliveries starting in the final quarter of 2022.

The Raptor’s imminent arrival in Europe is marked by an all-action stunt video, 3 which shows the vehicle leaping from a cargo plane in order to arrive on time for its European launch.

The biggest news for performance fans is the introduction of an all-new twin-turbo 3.0-litre EcoBoost V6 petrol engine tuned by Ford Performance to produce a targeted 288 PS and 491 Nm of torque. 1

The twin-turbo 3.0-litre EcoBoost V6 engine boasts a compacted graphite-iron cylinder block, which is around 75 per cent stronger and up to 75 per cent stiffer than the iron used in traditional castings. Ford Performance ensured the engine delivers immediate response to throttle inputs, and a race-bred anti-lag system similar to that first seen on the Ford GT road car and Focus ST enables rapid delivery of boost on demand.

The new anti-lag system, available in Baja mode, keeps the turbochargers spinning for up to three seconds after the driver backs off the throttle, allowing for faster resumption of acceleration out of corners or through the gears when the driver steps back on the accelerator. In addition, the engine is programmed with an individual turbocharging boost profile for each of the advanced 10-speed automatic transmission’s gears, for optimised performance.

“The 3.0-litre engine brings a different dynamic to the Ranger Raptor that will satisfy even the most hardcore performance enthusiast,” Burn said. “The acceleration and raw performance of the new powertrain leave you grinning from ear-to-ear.”

Drivers can choose their preferred engine sound by pressing a button on the steering wheel, or by selecting a drive mode that uses one of the following settings:

The current 2.0-litre EcoBlue bi‑turbo diesel engine will continue to be available in the Next-Gen Ranger Raptor from 2023, with further details available closer to launch. 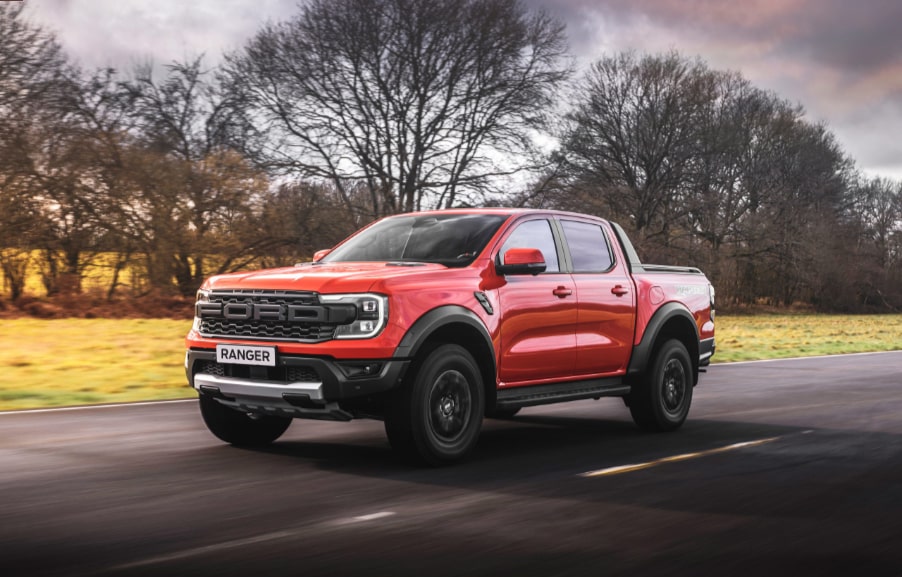 The Next-Gen Ranger Raptor has a unique chassis when compared to the all-new Ranger. A series of Raptor-specific mounts and reinforcements for elements including the C-pillar, load box and spare wheel, as well as unique frames for the jounce bumper, shock tower and rear shock bracket all combine to ensure Next-Gen Ranger Raptor can handle punishing off-road conditions.

A high-performance off-roader like the Ranger Raptor needs the running gear to match, so Ford engineers completely redesigned the suspension. All-new tough yet lightweight aluminium upper and lower control arms, long‑travel front and rear suspension and a refined Watt’s link rear end have been designed to deliver more control across rough terrain at high speed.

“The suspension upgrades in the Ranger Raptor make the most of the new FOX® Live Valve dampers. The suspension adapts in real-time to enable exceptional on-road body control while absorbing corrugations and bigger ruts off-road with ease, ensuring maximum control and performance,” Burn said.

The next-generation FOX® 2.5-inch Live Valve internal bypass shock absorbers feature cutting-edge control technology offering position-sensitive damping capability. These shock absorbers are the most sophisticated ever fitted to Ranger Raptor and are filled with Teflon™‑infused oil that reduces friction by around 50 per cent compared to those on the outgoing vehicle.

While the hardware is FOX®, the tuning and development work was carried out by Ford Performance using a mixture of computer-aided engineering and real-world testing. Everything from adjusting the spring rates to setting the ride height, valve tuning and honing the ride zones was performed to create the perfect balance between comfort, control, stability and traction on- and off-road.

In addition to working with the drive modes, the system works in the background to prepare Next-Gen Ranger Raptor for different conditions. As the shocks compress, different zones within the bypass system give exactly the amount of support needed for the travel being used, and work in reverse as the shocks rebound back to full height.

To provide protection against severe bottom outs, race-proven FOX® Bottom-Out Control provides maximum damping force in the last 25 per cent of shock travel. Similarly, the system can stiffen the rear dampers to prevent Ranger Raptor from squatting under hard acceleration, improving vehicle stability. With the shocks providing the right amount of damping force at every position, Ranger Raptor stays planted on both the road and track.

Ranger Raptor’s ability to tackle rough terrain is further enhanced with some serious underbody protection. The front bash plate is almost double the size of the standard Next‑Gen Ranger’s unit and is made from 2.3 mm-thick high-strength steel. This plate, combined with the engine undershield and transfer case shield, is designed to protect key components such as the radiator, steering system, front crossmember, engine sump and front differential.

Twin rated tow hooks at the front and rear provide flexible recovery options while driving off‑road; the design facilitates access to one of the tow hooks if the other is buried, as well as enabling the use of balance straps during snatch recoveries in deep sand or thick mud.

“While Ranger Raptor was inspired by desert racers, it’s also a supremely capable overlanding vehicle. Out of the box we’ve created an off-road vehicle that you don’t need to modify to get you where you need to go and back again safely,” Burn said.

Helping Next-Gen Ranger Raptor handle anything from smooth roads to mud and ruts, plus everything in between, are seven selectable drive modes, 2 including the off-road oriented Baja mode, which configures the vehicle’s electronic systems for ultimate performance during high-speed off‑roading.

“We really wanted Baja mode to be the ultimate expression of the high-speed off‑road capability,” Burn said. “It’s a feature at the core of what the Ranger Raptor customer expects.”

Each selectable drive mode adjusts a number of elements from engine and transmission to ABS sensitivity and calibration, traction and stability controls, exhaust valve actuation, steering and throttle response. In addition, the gauges, vehicle information and colour themes on the instrument cluster and centre touchscreen change with the selected drive mode. 2

Next-Gen Ranger Raptor also features Trail Control™, which is like cruise control for off‑roading. 2 The driver simply selects a set speed below 32 km/h and the vehicle will manage its acceleration and braking while the driver concentrates on steering through difficult terrain.

“Everything designed for the Ranger Raptor is there for a reason,” said Dave Dewitt, Ranger Raptor exterior design manager. “We’re communicating what Raptor can do just by the way it looks.”

The flared fenders cover muscular 17-inch alloy wheels wrapped in Raptor-exclusive performance all‑terrain tyres. Functional vents, aero features and tough, grippy cast-aluminium side steps help enhance the look and functionality of the truck. At the rear, LED taillights provide a signature styling link to the front, while the Precision Grey rear bumper features an integrated step pad and towbar that is tucked up high to avoid compromising the departure angle.

Inside, the theme continues to emphasise Ranger Raptor’s off-road performance and high‑energy nature. The cabin features all-new, jet fighter-inspired sports seats in the front and rear to increase comfort and offer more support during high-speed cornering.

The Code Orange accents on the instrument panel, trim and seats are mirrored by Ranger Raptor’s ambient lighting, which bathes the interior in an amber glow. A premium leather sports heated steering wheel with thumb swells, on-centre marking and cast-magnesium paddle shifters completes the sporty feel.

Occupants will also benefit from the latest digital technology; the high‑tech cabin features a 12.4‑inch all-digital cluster and 12-inch centre touchscreen boasting Ford’s new-generation SYNC 4A® connectivity and entertainment system 4 that delivers wireless Apple CarPlay and Android Auto™ compatibility at no extra cost. 5 A 10-speaker B&O® sound system 6 provides the soundtrack to your next adventure.

Part of the Ford Performance family

The roots of the Raptor name lie in North America, where Ford has used it on high‑performance pick-up trucks and utility vehicles since the first-generation F-150 SVT Raptor, which was optimised for high-speed off-road performance. The Ford Performance-developed Ranger Raptor expanded the Raptor badge to other global markets in 2018, including to a new audience of hardcore off‑road truck fans in Europe.

The all-new Ranger Raptor continues this legacy, with a purpose‑built vehicle that balances daily duties with performance never before seen in a pick-up of Ranger’s size.

“We knew that customers would expect improved performance with the Next-Gen Ranger Raptor, but I’m not sure they’re really expecting the enormous leap we’ve made. It’s a seriously fun truck to drive and I think the raw performance is going to blow them away,” Burn said.

1 Officially homologated fuel efficiency and CO2 emissions figures will be published closer to on-sale date. The declared WLTP fuel/energy consumptions, CO2-emissions and electric range are determined according to the technical requirements and specifications of the European Regulations (EC) 715/2007 and (EU) 2017/1151 as last amended. The applied standard test procedures enable comparison between different vehicle types and different manufacturers.

2 Driver-assist features are supplemental to and do not replace the driver’s attention, judgment and need to control the vehicle. It does not replace safe driving. See Owner’s Manual for details and limitations.

3 Professional driver on a closed course. Always consult the Raptor supplement to the Owner’s Manual before off-road driving, know your terrain and trail difficulty, and use appropriate safety gear.

4 Don’t drive while distracted or while using handheld devices. Use voice-operated systems when possible. Some features may be locked out while the vehicle is in gear. Not all features are compatible with all phones.

5 Requires phone with active data service and compatible software. SYNC 4 does not control 3rd party products while in use. 3rd Parties are solely responsible for their respective functionality.

View all the latest Promotions from Boland Motors

View all the latest news from Boland Motors